The view south from the summit of Fisher's Peak, North Carolina, in the summer of 1951. This photograph, taken by thru hiker Gene Espy in July 1951, is one of the only known images of the view from the Appalachian Trail on Fisher's Peak when the trail still ran through this part of Southwestern Virginia. Gene Espy was the second person to successfully hike the entire trail in one season. 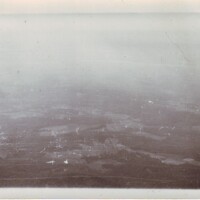 The original route of the Appalachian Trail crossed into North Carolina on Fisher's Peak, just south of the Blue Ridge Music Center (built in 1997). This image shows the Peak in the winter of 1932 and demonstrates how different the landscape was in the 1930s, when the Peak was almost entirely free of trees. Today, it is almost entirely wooded.

The trail guide for this section of trail describes the signature feature of the hike across the Peak as the fields of massive rhododendron bushes covering the peak, a feature that helps to explain why the city of Galax (just a dozen miles northwest) held its rhododendron festival there starting in 1931. 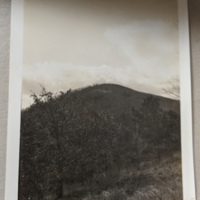 The old route of the Appalachian Trail crossed into North Carolina on Fisher's Peak, just north of the Blue Ridge Music Center along the Blue Ridge Parkway, both of which were built much later. After passing through the resort known as Norvale Crags, the trail looped back northwest into Virginia toward Galax.

This photograph, taken by ATC Chairman Myron Avery in 1932 during one of his hikes along the old trail route, looks west along the Virginia/North Carolina line toward the New River and the Grayson Highlands in the far distance. 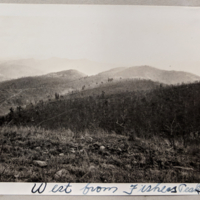 This photograph taken by ATC Chairman Myron Avery shows the view of the Appalachian Trail south into North Carolina at Fisher's Peak from Fancy Gap, Virginia. This is one of many photographs of the old route of the trail taken by Avery during his numerous expeditions to this part of Virginia between 1930-1950. 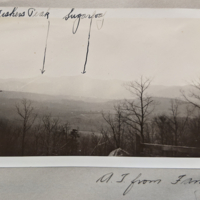