Byllesby Dam on the New River as seen from Farmer Mountain in early July 1951. This photograph was taken by Gene Espy during his 1951 thru hike of the Appalachian Trail, the second such hike completed in one season. 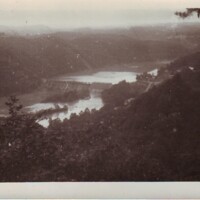 Hikers on the Appalachian Trail headed northbound reached the New River at Byllesby Dam, one of several hydroelectric dams built by the Appalachian Power Company in the early 20th century. Byllesby Dam was completed in 1912, and continues in operation today. From the dam, hikers turned south (upstream) along the river, roughly following the railroad line that ended at the town of Fries, site of another of the Appalachian Power Company dams. Just before reaching Fries, hikers turned aside to Dixon's Ferry, where they took a flat bottomed ferry boat across the river and then headed up the ridge toward the town of Galax. 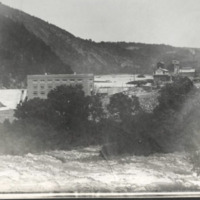