This photograph was taken by Gene Espy during his 1951 thru hike of the Appalachian Trail from the Jones Knob lookout, possibly from the fire tower that used to stand there. Espy was the second person to successfully thru hike the trail and likely took this photograph on July 1, 1951. 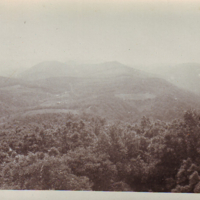 This map depicts three of the routes of the Appalachian Trail in Southwestern Virginia -- the route laid out in 1931 by Shirley Cole and Roy Ozmer, the route used between 1933-1952, and the present route of the trail. The original route looped south of Roanoke and Salem to the junction of Floyd, Franklin, and Roanoke counties, before proceeding south toward Fisher's Peak in North Carolina. After 1933, the Roanoke Appalachian Trail Club convinced the ATC to shift the northern portion of this trail section north and west of Roanoke to bring it across Catawba Mountain, the location of Tinker Cliffs and McAfee Knob. After 1952, the ATC abandoned this original route of the AT and moved the trail more than 50 miles west to its present location west of Blacksburg.

The original route of the Appalachian Trail in Southwestern Virginia passed within a mile of the Mabry Mill, pictured here. Located along the Blue Ridge Parkway near Meadows of Dan, Virginia, Edwin Mabry built the mill in 1903. Originally a sawmill, by 1905, the mill had been converted to a gristmill. It was incorporated into the Blue Ridge Parkway in the 1930s, and today is believed to be the most photographed site along the Parkway. 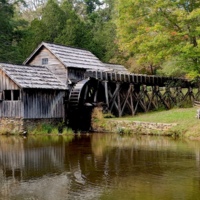 The store, restaurant, and motel at Tuggle Gap, pictured here, built in the early 1940s, sits at the intersection of Highway 8 and the Blue Ridge Parkway. The old route of the Appalachian Trail passed directly by the store until the trail was moved west in 1952 to its current location. 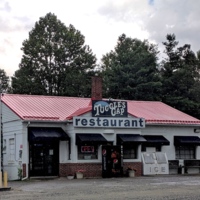 From 1932-1952, the Appalachian Trail followed an entirely different route between Roanoke and Damascus, Virginia from the one it uses today. The Guide to the Paths of Blue Ridge (1941 edition) details each section of that hike from Route 11 just northwest of Roanoke, down through Floyd, Patrick, Carroll, Grayson, and Washington Counties in great detail. This section of the guide describes the route between Tuggle Gap and US Highway 58, just north of the Dan River Gorge. It includes the popular Rocky Knob Recreation Area along the Blue Ridge Parkway. 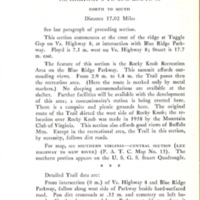 On July 5, 1951, Gene Espy passed through Galax, Virginia on his way north from Mount Oglethorpe in Georgia. Espy, from Cordele, Georgia, was the second person to successfully hike the entire Appalachian Trail in one season.

This story, from the Galax Gazette is particularly interesting for the discomfort of the reporter with Espy's beard. In 1951, a bearded man was often suspected of being either a vagabond or a communist. In his book about that 1951 hike, Espy describes several times when he was misunderstood because of that beard. 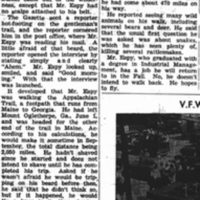 In 1951, Chester Dziengielewski, a machinist from Naugatuck, Connecticut, was the first person to successfully hike the entire Appalachian Trail in one season in a southbound direction. On September 20, he stopped in Galax, Virginia on his way through Southwestern Virginia and was interviewed by a reporter from the Galax Gazette.

The story, pictured here, describes his experiences along the trail and his meeting with Gene Espy, who was hiking northbound that same summer. Two other hikers were also attempting a southbound thru hike that summer -- Martin Papendick, a World War II veteran from Michigan, and Bill Hall, a teenager from Ohio. Papendick also passed through Galax a few weeks later, but Hall skipped the section between Roanoke and Damascus because he was running short of funds and time. 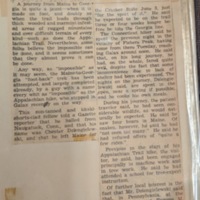 The old route of the Appalachian Trail south and west of Roanoke, Virginia, climbed up and over Poor Mountain from the village of Glenvar in the Roanoke River Valley. This road, impassible in winter today, passed through the summer colony of Hemlock Dell, rising rapidly over 3.5 miles until it reached summit of Poor Mountain at 3,960'.

From the summit of Poor Mountain, the trail then passed close to Bent Mountain Falls, the second highest cascade in Virginia. Today, the Falls are part of the Bottom Creek Preserve, owned by the Nature Conservancy. 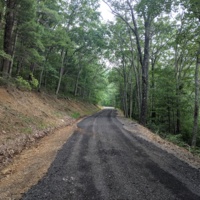 Hikers on the old route of the Appalachian Trail in Southwestern Virginia often used churches, stores, and schools, many of them abandoned, as navigation points during their hike. While the stores and schools are mostly either gone or in significant states of disrepair, many of the churches along the old route continue to hold services, or have been preserved by members of the community or the Blue Ridge Parkway staff.

The County Line Primitive Baptist Church, pictured here, is one such landmark listed in the Guide to the Paths of the Blue Ridge, which said, "Pass County Line Church on left; immediately after, at 25.02 turn sharp left on well-worn road." 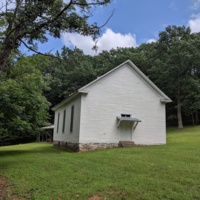 The old route of the Appalachian Trail passed through what is now known as Smart View Recreation Area along the Blue Ridge Parkway. At the time the trail was created in Floyd County in 1930, the first edition of the Guide to the Paths of the Blue Ridge makes no mention of the park. The cabin pictured here was built by W. J. Trail in the 1880s. 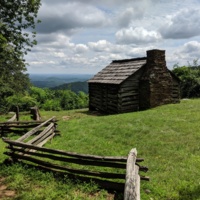